You may need to find a P-value if you are using the P-value approach to conduct a hypothesis test that uses a t-statistic.

The US National Research Council currently recommends that females between the ages of 11 and 50 intake 15 milligrams of iron daily.

Is there evidence that the population of American females is, on average, getting less than the recommended 15 mg of iron? That is, should we reject the null hypothesis H0: μ = 15 against the alternative HA: μ < 15?

The iron intakes (irondef.txt) of a random sample of 25 such American females yielded a t-statistic of -1.48.

If we were interested in calculating the test at the α = 0.05 level, what is the appropriate P-value to which we should compare the t-statistic? 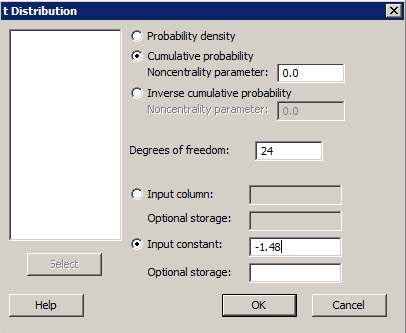