In this section, we learn how to use residuals versus fits (or predictor) plots to detect problems with our formulated regression model. Specifically, we investigate:

Note! that although we will use residuals vs. fits plots throughout our discussion here, we just as easily could use residuals vs. predictor plots (providing the predictor is the one in the model)
Answer:
The residuals depart from 0 in some systematic manner, such as being positive for small x values, negative for medium x values, and positive again for large x values. Any systematic (non-random) pattern is sufficient to suggest that the regression function is not linear.

Example Is tire tread wear linearly related to mileage? A laboratory (Smith Scientific Services, Akron, OH) conducted an experiment in order to answer this research question. As a result of the experiment, the researchers obtained a data set (Treadwear data) containing the mileage (x, in 1000 miles) driven and the depth of the remaining groove (y, in mils). The fitted line plot of the resulting data: 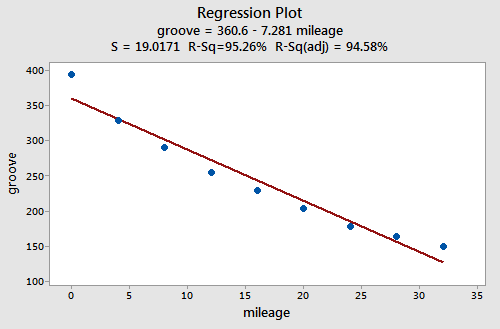 suggests that there is a relationship between groove depth and mileage. The relationship is just not linear. As is generally the case, the corresponding residuals vs. fits plot accentuates this claim: 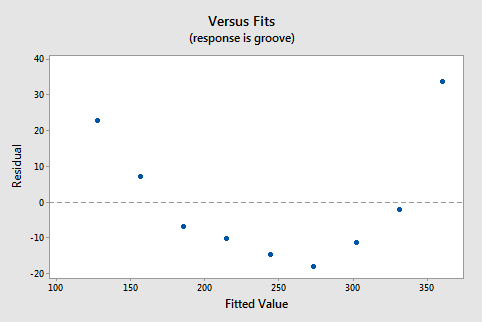 Note! that the residuals depart from 0 in a systematic manner. They are positive for small x values, negative for medium x values, and positive again for large x values. Clearly, a non-linear model would better describe the relationship between the two variables.

Incidentally, did you notice that the \(r^2\) value is very high (95.26%)? This is an excellent example of the caution that "a large \(r^2\) value should not be interpreted as meaning that the estimated regression line fits the data well." The large \(r^2\) value tells you that if you wanted to predict groove depth, you'd be better off taking into account mileage than not. The residuals vs. fits plot tells you, though, that your prediction would be better if you formulated a non-linear model rather than a linear one.

Answer:
Non-constant error variance shows up on a residuals vs. fits (or predictor) plot in any of the following ways: 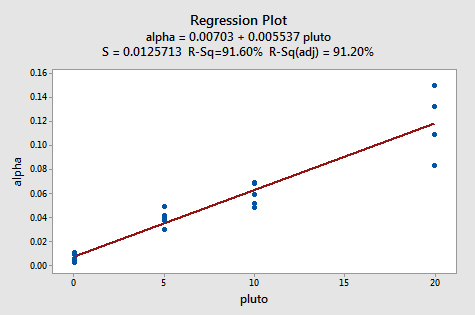 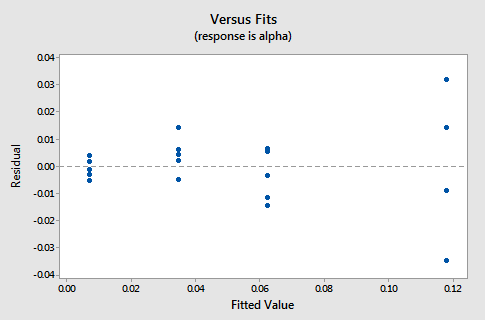 Note! that the residuals "fan out" from left to right rather than exhibiting a consistent spread around the residual = 0 line. The residual vs. fits plot suggests that the error variances are not equal

An Example: Is there a relationship between tobacco use and alcohol use? The British government regularly conducts surveys on household spending. One such survey (Family Expenditure Survey, Department of Employment, 1981) determined the average weekly expenditure on tobacco (x, in British pounds) and the average weekly expenditure on alcohol (y, in British pounds) for households in n = 11 different regions in the United Kingdom. The fitted line plot of the resulting data (Alcohol Tobacco dataset):

suggests that there is an outlier — in the lower right corner of the plot — which corresponds to the Northern Ireland region. In fact, the outlier is so far removed from the pattern of the rest of the data that it appears to be "pulling the line" in its direction. As is generally the case, the corresponding residuals vs. fits plot accentuates this claim: 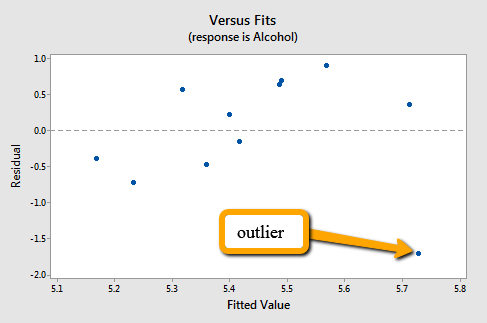 Note that Northern Ireland's residual stands apart from the basic random pattern of the rest of the residuals. That is, the residual vs. fits plot suggests that an outlier exists.

Incidentally, this is an excellent example of the caution that the "coefficient of determination \(r^2\) can be greatly affected by just one data point." Note above that the \(r^2\) value on the data set with all n = 11 regions included is 5%. Removing Northern Ireland's data point from the data set, and refitting the regression line, we obtain: 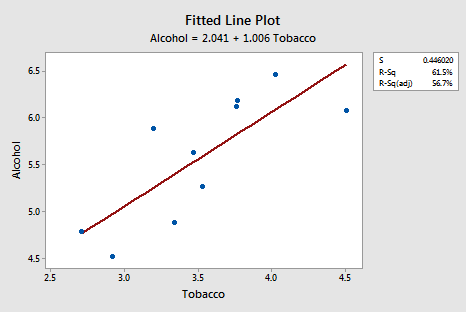 There's a solution to this problem. We can make the residuals "unitless" by dividing them by their standard deviation. In this way, we create what is called "standardized residuals." They tell us how many standard deviations above — if positive — or below — if negative — a data point is from the estimated regression line.

Note! that there are a number of alternative ways to standardize residuals, which we will consider in Lesson 11.) Recall that the empirical rule tells us that, for data that are normally distributed, 95% of the measurements fall within 2 standard deviations of the mean. Therefore, any observations with a standardized residual greater than 2 or smaller than -2 might be flagged for further investigation. It is important to note that by using this "greater than 2, smaller than -2 rule," approximately 5% of the measurements in a data set will be flagged even though they are perfectly fine. It is in your best interest not to treat this rule of thumb as a cut-and-dried, believe-it-to-the-bone, hard-and-fast rule! So, in most cases, it may be more practical to investigate further any observations with a standardized residual greater than 3 or smaller than -3 (using the empirical rule we would expect only 0.3% of observations to fall into this category

The corresponding standardized residuals vs. fits plot for our expenditure survey example looks like this: 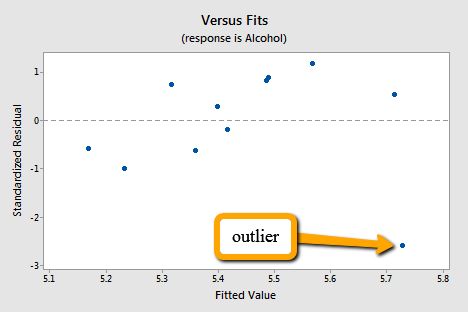 The standardized residual of the suspicious data point is smaller than -2. That is, the data point lies more than 2 standard deviations below its mean. Since this is such a small dataset the data point should be flagged for further investigation!

Incidentally, Minitab (and most other statistical software) identifies observations with large standardized residuals. Here is what a portion of Minitab's output for our expenditure survey example looks like:

Note! that I have intentionally used the phrase "flagged for futher investigation." I have not said that the data point should be "removed." Here's my recommended strategy, once you've identified a data point as being unusual: