For the remainder of this section, we discuss how the criteria identified above can help us reduce a large number of possible regression models to just a handful of models suitable for further evaluation.

For the sake of an example, we will use the cement data to illustrate the use of the criteria. Therefore, let's quickly review — the researchers measured and recorded the following data (Cement data) on 13 batches of cement:

And, the matrix plot of the data looks like this: 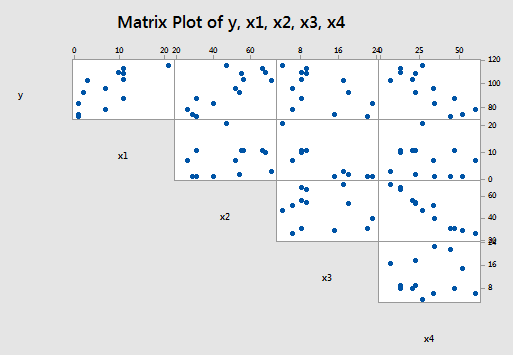 All is not lost, however. We can instead use the \(R^{2} \text{-values}\) to find the point where adding more predictors is not worthwhile, because it yields a very small increase in the \(R^{2}\)-value. In other words, we look at the size of the increase in \(R^{2}\), not just its magnitude alone. Because this is such a "wishy-washy" criterion, it is used most often in combination with the other criteria.

Now, you might have noticed that the adjusted \(R^{2} \text{-value}\) is a function of the mean square error (MSE). And, you may — or may not — recall that MSE is defined as:

That is, MSE quantifies how far away our predicted responses are from our observed responses. Naturally, we want this distance to be small. Therefore, according to the MSE criterion, the best regression model is the one with the smallest MSE.

But, aha — the two criteria are equivalent! If you look at the formula again for the adjusted \(R^{2} \text{-value}\):

Here goes! At issue in any regression model are two things, namely:

Recall that, in fitting a regression model to data, we attempt to estimate the average — or expected value — of the observed responses \(E \left( y_i \right) \) at any given predictor value x. That is, \(E \left( y_i \right) \) is the population regression function. Because the average of the observed responses depends on the value of x, we might also denote this population average or population regression function as \(\mu_{Y|x}\).

We can picture this bias as follows:

Earlier in this lesson, we saw an example in which bias was likely introduced into the predicted responses because of an underspecified model. The data concerned the heights and weights of Martians. The Martian data set — don't laugh — contains the weights (in g), heights (in cm), and amount of daily water consumption (0, 10, or 20 cups per day) of 12 Martians.

But, if we regress y = weight on only the one predictor \(x_{1}\) = height, we obtain the following estimated regression equation:

A plot of the data containing the two estimated regression equations looks like this: 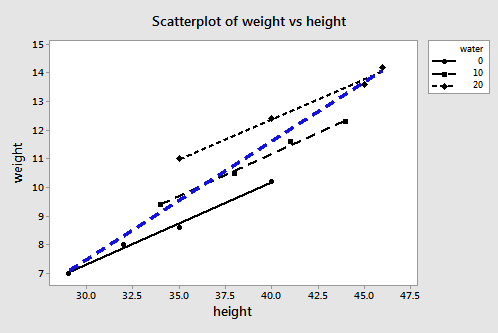 Now, we don't have the tools to prove it, but it can be shown that if there is no bias in the predicted responses — that is, if the bias = 0 — then \(\Gamma_p\) achieves its smallest possible value, namely p, the number of parameters:

Now, because it quantifies the amount of bias and variance in the predicted responses, \(\Gamma_p\) seems to be a good measure of an underspecified model:

The best model is simply the model with the smallest value of  \(\Gamma_p\). We even know that the theoretical minimum of \(\Gamma_p\) is the number of parameters p.

where \(MSE_{p}\) is the mean squared error from fitting the model containing the subset of p-1 predictors (which with the intercept contains p parameters).

But we don't know \(\sigma^{2}\). So, we estimate it using \(MSE_{all}\), the mean squared error obtained from fitting the model containing all of the candidate predictors. That is:

Finally — we're getting to the moral of the story! Just a few final facts about Mallows' \(C_{p}\)-statistic will get us on our way. Recalling that p denotes the number of parameters in the model:

That all said, here's a reasonable strategy for using \(C_{p}\) to identify "best" models:

Ahhh—an example! Let's see what model the \(C_{p}\) criterion leads us to for the cement data:

So, in this case, based on the \(C_{p}\) criterion, the researcher has three legitimate models from which to choose with respect to bias. Of these three, the model containing the predictors \(x_{1}\) and \(x_{2}\) has the smallest \(C_{p}\) value, but the \(C_{p}\) values for the other two models are similar and so there is little to separate these models based on this criterion.

The possible predictor sets and the corresponding models are given below: