The "full model", which is also sometimes referred to as the "unrestricted model," is the model thought to be most appropriate for the data. For simple linear regression, the full model is:

Here's a plot of a hypothesized full model for a set of data that we worked with previously in this course (student heights and grade point averages): 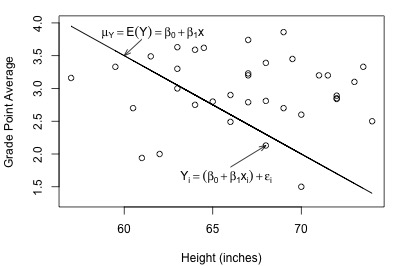 And, here's another plot of a hypothesized full model that we previously encountered (state latitudes and skin cancer mortalities): 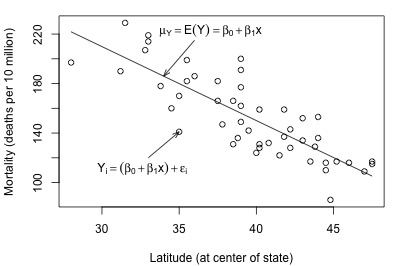 In each plot, the solid line represents what the hypothesized population regression line might look like for the full model. The question we have to answer in each case is "does the full model describe the data well?" Here, we might think that the full model does well in summarizing the trend in the second plot but not the first.

Let's take another look at the plot of student grade point average against height, but this time with a line representing what the hypothesized population regression line might look like for the reduced model: 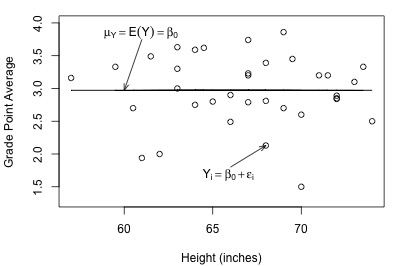 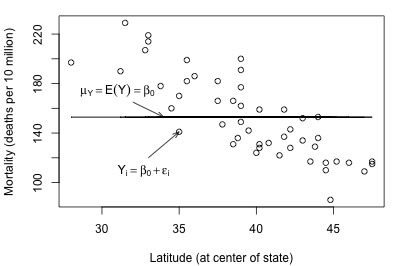 It doesn't appear as if the reduced model would do a very good job of summarizing the trend in the population.

How do we decide if the reduced model or the full model does a better job of describing the trend in the data when it can't be determined by simply looking at a plot? What we need to do is to quantify how much error remains after fitting each of the two models to our data. That is, we take the general linear test approach:

Recall that, in general, the error sum of squares is obtained by summing the squared distances between the observed and fitted (estimated) responses:

And, since \(y_i\) is the observed response and \(\bar{y}\) is the fitted response for the reduced model: 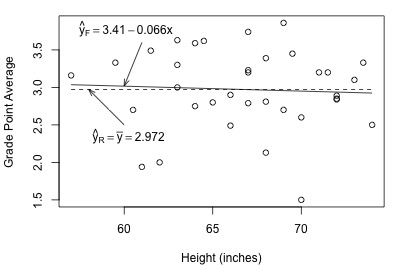 As you can see, the estimated lines are almost identical. Calculating the error sum of squares for each model, we obtain:

The two quantities are almost identical. Adding height to the reduced model to obtain the full model reduces the amount of error by only 0.0276 (from 9.7331 to 9.7055). That is, adding height to the model does very little in reducing the variability in grade point averages. In this case, there appears to be no advantage in using the larger full model over the simpler reduced model.

Look what happens when we fit the full and reduced models to the skin cancer mortality and latitude dataset: 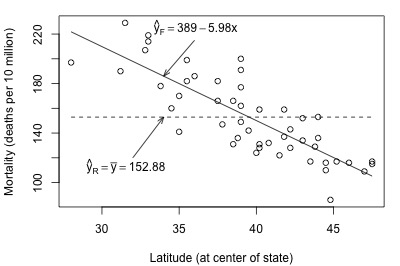 Where are we going with this general linear test approach? In short:

How different does SSE(R) have to be from SSE(F) in order to justify using the larger full model? The general linear F-statistic:

helps answer this question. The F-statistic intuitively makes sense — it is a function of SSE(R)-SSE(F), the difference in the error between the two models. The degrees of freedom — denoted \(df_{R}\) and \(df_{F}\) — are those associated with the reduced and full model error sum of squares, respectively.

We use the general linear F-statistic to decide whether or not:

In general, we reject \(H_{0}\) if F* is large — or equivalently if its associated P-value is small.

The test applied to the simple linear regression model Section

and the reduced model is:

Therefore, the appropriate null and alternative hypotheses are specified either as:

The degrees of freedom associated with the error sum of squares for the reduced model is n-1, and:

The degrees of freedom associated with the error sum of squares for the full model is n-2, and:

Now, we can see how the general linear F-statistic just reduces algebraically to the ANOVA F-test that we know:

Can be rewritten by substituting...

That is, the general linear F-statistic reduces to the ANOVA F-statistic:

For the student height and grade point average example:

For the skin cancer mortality example:

Does alcoholism have an effect on muscle strength? Some researchers (Urbano-Marquez, et al, 1989) who were interested in answering this question collected the following data (Alcohol Arm data) on a sample of 50 alcoholic men:

Therefore, the appropriate null and alternative hypotheses are specified either as:

Upon fitting the reduced model to the data, we obtain: 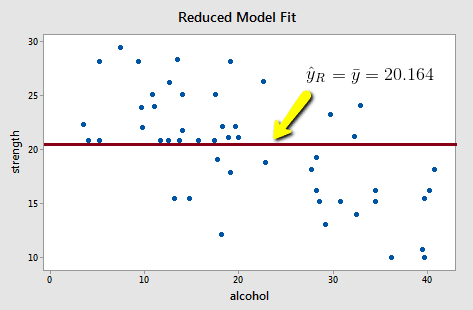 Note that the reduced model does not appear to summarize the trend in the data very well.

Upon fitting the full model to the data, we obtain:

The full model appears to describe the trend in the data better than the reduced model.

The good news is that in the simple linear regression case, we don't have to bother with calculating the general linear F-statistic. Minitab does it for us in the ANOVA table.

Click on the light bulb to see the error in the full and reduced models.

and its associated P-value is < 0.001 (so we reject \(H_{0}\) and favor the full model). We can conclude that there is a statistically significant linear association between lifetime alcohol consumption and arm strength.

This concludes our discussion of our first aside from the general linear F-test. Now, we move on to our second aside from sequential sums of squares.