Exampe 5-2: What are the breathing habits of baby birds that live in underground burrows? Section 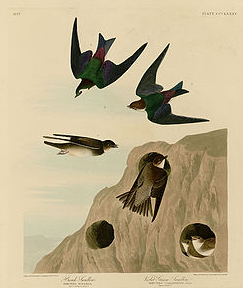 Some mammals burrow into the ground to live. Scientists have found that the quality of the air in these burrows is not as good as the air aboveground. In fact, some mammals change the way that they breathe in order to accommodate living in the poor air quality conditions underground.

Here's a scatter plot matrix of the resulting data obtained by the researchers: 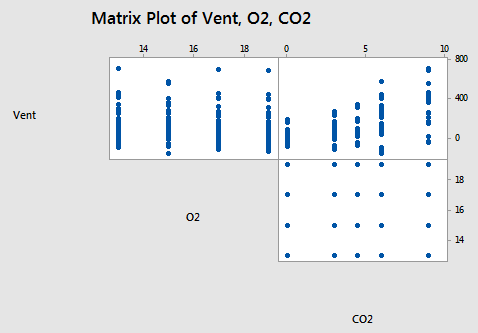 What does this particular scatter plot matrix tell us? Do you buy into the following statements?

When we have one response variable and only two predictor variables, we have another sometimes useful plot at our disposal, namely a "three-dimensional scatter plot:"

If we added the estimated regression equation to the plot, what one word do you think describes what it would look like? Drag the slider on the bottom of the graph above to show the plot of the estimated regression equation for this data. Does it make sense that it looks like a "plane?" Incidentally, it is still important to remember that the plane depicted in the plot is just an estimate of the actual plane in the population that we are trying to study.

Here is a reasonable "first-order" model with two quantitative predictors that we could consider when trying to summarize the trend in the data:

The adjective "first-order" is used to characterize a model in which the highest power on all of the predictor terms is one. In this case, the power on \(x_{i1}\), although typically not shown, is one. And, the power on \(x_{i2}\) is also one, although not shown. Therefore, the model we formulated can be classified as a "first-order model." An example of a second-order model would be \(y=\beta_0+\beta_1x+\beta_2x^2+\epsilon\).

Here's the output we obtain when we ask Minitab to estimate the multiple regression model we formulated above:

What do we learn from the Minitab output?