When conducting a residual analysis, a "residuals versus fits plot" is the most frequently created plot. It is a scatter plot of residuals on the y-axis and fitted values (estimated responses) on the x-axis. The plot is used to detect non-linearity, unequal error variances, and outliers.

Let's look at an example to see what a "well-behaved" residual plot looks like. Some researchers (Urbano-Marquez, et al., 1989) were interested in determining whether or not alcohol consumption was linearly related to muscle strength. The researchers measured the total lifetime consumption of alcohol (x) on a random sample of n = 50 alcoholic men. They also measured the strength (y) of the deltoid muscle in each person's non-dominant arm. A fitted line plot of the resulting data, (Alcohol Arm data), looks like this: 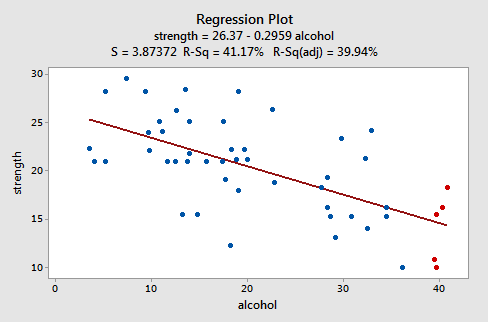 The plot suggests that there is a decreasing linear relationship between alcohol and arm strength. It also suggests that there are no unusual data points in the data set. And, it illustrates that the variation around the estimated regression line is constantly suggesting that the assumption of equal error variances is reasonable.

Here's what the corresponding residuals versus fits plot looks like for the data set's simple linear regression model with arm strength as the response and level of alcohol consumption as the predictor: 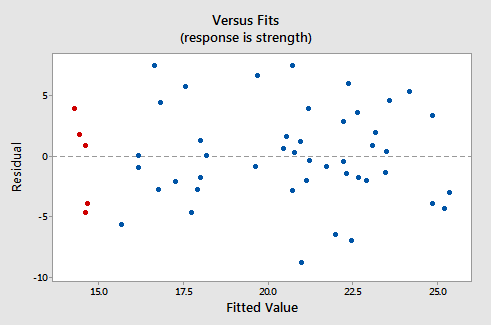 Note that, as defined, the residuals appear on the y-axis and the fitted values appear on the x-axis. You should be able to look back at the scatter plot of the data and see how the data points there correspond to the data points in the residual versus fits plot here. In case you're having trouble with doing that, look at the five data points in the original scatter plot that appears in red. Note that the predicted response (fitted value) of these men (whose alcohol consumption is around 40) is about 14. Also, note the pattern in which the five data points deviate from the estimated regression line.

In general, you want your residual vs. fits plots to look something like the above plot. Don't forget though that interpreting these plots is subjective. My experience has been that students learning residual analysis for the first time tend to over-interpret these plots, looking at every twist and turn as something potentially troublesome. You'll especially want to be careful about putting too much weight on residual vs. fits plots based on small data sets. Sometimes the data sets are just too small to make the interpretation of a residual vs. fits plot worthwhile. Don't worry! You will learn — with practice — how to "read" these plots, although you will also discover that interpreting residual plots like this is not straightforward. Humans love to seek out order in chaos, and patterns in randomness. It's like looking up at the clouds in the sky - sooner or later you start to see images of animals. Resist this tendency when doing graphical residual analysis. Unless something is pretty obvious, try not to get too excited, particularly if the "pattern" you think you are seeing is based on just a few observations. You will learn some numerical methods for supplementing the graphical analyses in Lesson 7. For now, just do the best you can, and if you're not sure if you see a pattern or not, just say that.

Here are the data with fitted values and residuals:

And, here is a scatterplot of these residuals vs. the fitted values:

Given the small size, it appears that the residuals bounce randomly around the residual = 0 line. The horizontal line resid = 0 (red dashed line) represents potential observations with residuals equal to zero, indicating that such observations would fall exactly on the fitted regression line.